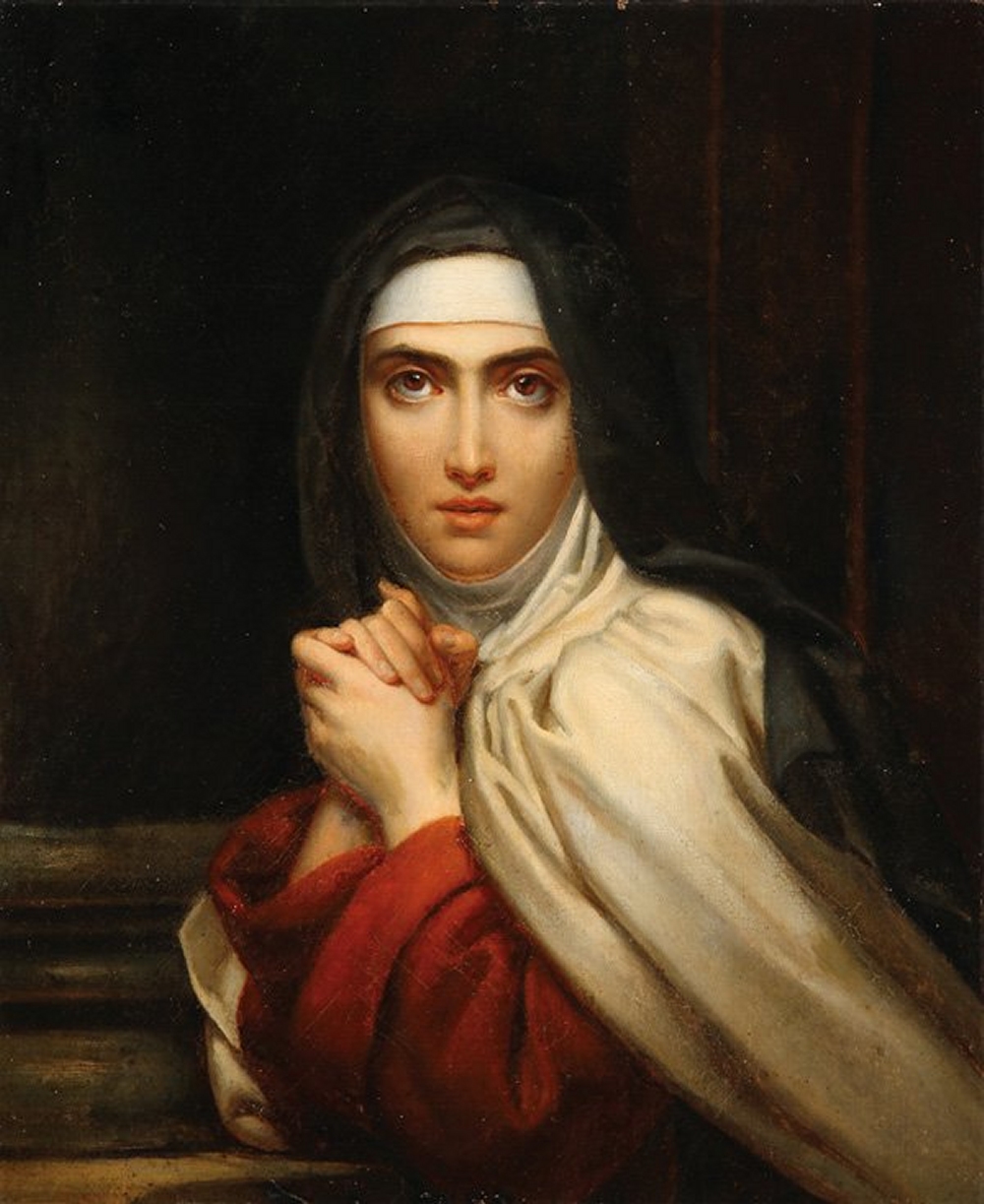 When you hear “Doctor of the Church,” what do you think? A phrase like that probably doesn’t get you hyped, pumped, or otherwise thrilled. It’s easy to dismiss the saints who bear that title as “ancient geniuses,” “really pious people,” and “lofty intellectual guys.” And while these saints (there are three dozen of them) are geniuses, did happen to be really pious, and admittedly were quite intellectual, these ideas are misnomers in a way because when we focus on them, we miss the most important thing about the saints. Their great learning and wisdom, mighty as it was, sprang from a deep and genuine relationship with Jesus Christ, and that right there is something well within our grasp, if we will work for it. In a way, these saints are the most powerful witnesses of how the power of Christ’s truth can be joined with an authentic and intensely interesting Christian life. I’d like to introduce you to some of these saints, and I’ll start with St. Teresa of Ávila, seeing as her feast day was earlier this month: October 15th, to be precise.

St. Teresa of Ávila was born in March of 1515, only a few short years before the Protestant Reformation erupted in Europe. Her parents would never have guessed that their daughter would be a leading figure in the great Catholic Counter-Reformation. Her father, Alonso de Cepeda, was a wealthy merchant and devout Catholic of Jewish roots, whose marriage to Beatriz de Ahumada y Cuevas brought him Teresa and ten other children. Due to the influence of her devout parents, Teresa acquired a great love for God and the saints to the point that, when she was seven, she and her brother Rodrigo ran away. Why, you might ask? Well, apparently the obvious answer is to get martyred by the nearby Muslim Moors. Their well-meant escapade was promptly halted by their uncle, who did not approve in the least when he observed the youngsters wandering outside the city alone. But her childhood was marked by sorrow, too. Her mother died when she was about twelve years old. Teresa herself relates: “I threw myself down in despair before an image of the Mother of God. With many tears, I implored the Holy Virgin to become my mother now. Uttered with the simplicity of a child, this prayer was heard. From that hour on, I never prayed to the Virgin in vain.” Considering what became of that young girl, I’d say that Mary, the Mother of all the motherless, did a mighty fine job of looking after her.

When she at last finished her schooling at the age of eighteen, she entered the Carmelite Convent of the Incarnation in Ávila. Not long after entering, she fell ill to the point of death and was bedridden for over a year. But she made good use of her time, immersing herself in the practice of prayer and growing in holiness. Though she was miraculously cured by St. Joseph’s intercession, her sickness left lasting impressions on her, some physical, some spiritual. She was plagued for the rest of her life with health problems, but the spiritual effects were somewhat more remarkable. In that year of prayer, suffering, and abandonment to God’s will, her spiritual life had skyrocketed, and God had begun to draw her deeper and deeper into his love. She experienced visions, locutions, and great revelations, which accompanied her through years of stagnation in her spiritual life, and which led finally to a culmination in a vision years later, where her heart was pierced with a flaming golden spear of Divine Love, the pain and sweetness of which surpassed all words. It was this experience that led her to meditate on and to imitate more closely the suffering of Christ, to the point that she said, “Lord let me suffer, or let me die.” Her love of God drove her to pursue a life of even greater holiness. But a life of greater holiness wasn’t really in vogue at the time. Her convent was quite worldly, and the nuns there lived a lavish life which rivaled that of the secular people of the city. So, with the permission of her superiors, she began a reformed branch of the Carmelite Order, embracing the penance and austerity which had been the original intent of the order’s founders. But her reforms soon found many bitter enemies within her own order, who were jealous, discomfited, and angered by her work, especially when local bishops invited her in to shape them up. She and her convents underwent severe suppression from their superiors, to the point that in one convent, the nuns who voted to have her as their prioress were all excommunicated by the order provincial. But respite came in 1580 when Pope Gregory XIII recognized the reformed Carmelites as a separate order, freeing Teresa from the jurisdiction of her persecutors. She died only two years later at the age of 67, having founded sixteen convents in the twenty years since she had begun her reform.

Now, when it comes to the saints, their writings are just about as inspiring as their lives. I’ve chosen out a few particularly memorable lines which reveal something of St. Teresa’s wisdom. (And perhaps a bit of her good humor. She had plenty.)

Let nothing disturb you,

Let nothing dismay you:

All that it strives for.

He who has God

Finds he lacks nothing;

This beautiful prayer of trust in God’s love and goodness reminds us that when we possess God in our hearts, there is literally nothing on earth that can do us lasting harm. Think about it. If God is all-powerful (and He has to be – He made everything), and if he is all-loving (remember, He gave us His only Son to redeem us), then we have no excuse to be afraid. Of course, that’s not to say that weakness, suffering, and hardships will avoid faithful souls. Those things will come, just as surely for us as it did for all the saints. Once, when traveling through a storm at night, amid danger from the weather and from a raging river, St. Teresa cried out, “Oh, my Lord, when will You cease from scattering obstacles in our path?”

“Do not complain, daughter,” the Divine Master answered, “for it is ever thus that I treat My friends.”

Despite her witty comeback, she did truly understand how suffering fits into God’s plan for us. Suffering was a significant aspect of her life, so much so that she is the patron saint of those who experience headaches. But she knew how to make good use of her pain, and shares what she’d learned without mincing words:

“One must not think that a person who is suffering is not praying. He is offering up his sufferings to God, and many a time he is praying much more truly than one who goes away by himself and meditates his head off, and, if he has squeezed out a few tears, thinks that is prayer.”

In short, prayer is more than a product of words and emotions, and suffering is an opportunity, rather than something to be feared. The merit of suffering is twofold. First, it purifies our love of God. When our spiritual life is strewn with sunshine and roses, we tend to love the pleasant things more than the God who created them. True love is proved by faithfulness even when we reap no apparent reward. Secondly, our sufferings, when united to Christ’s sacrifice on the cross, take on immense and eternal spiritual value by virtue of our participation in Christ’s great High-Priesthood and in His offering to the Eternal Father. This is affirmed by Jesus’ revelations to the saint of Divine Mercy, St. Faustina: “There is but one price at which souls are bought, and that is suffering united to My suffering on the cross,” (Diary 324). And again, “Every conversion of a sinful soul demands sacrifice,” (Diary 961).

In a world that today is in desperate need of conversion and returning to God, better advice can hardly be given than to turn every adverse situation that we experience into a prayer and sacrifice. You will never know how many souls you will touch in that way without meeting any of them in this life.

And finally, if you have a hankering to read more of St. Teresa’s works, she wrote several great classics of Catholic spirituality, her best-known ones being The Interior Castle and The Way of Perfection.

May Christ be with you all, and may His Mother shield you beneath her mantle.

All for Thee, Sweet Jesus,

Through the Immaculate Heart of Mary,

For the glory of God

And the salvation of souls.