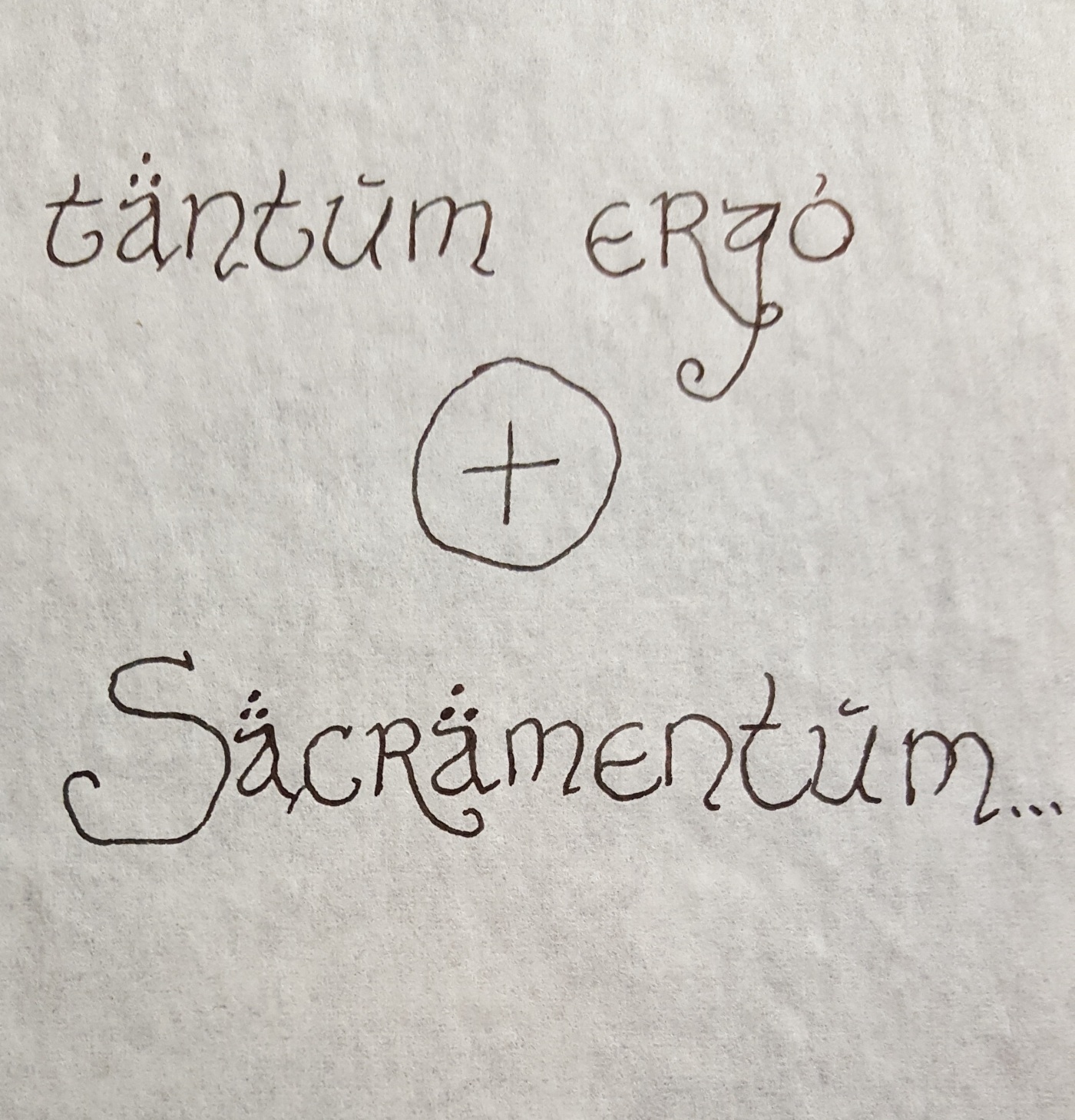 J.R.R. Tolkien, author of “The Lord of the Rings,” is known throughout the world as the father of modern fantasy stories. In 2008, he was listed by The Times as the sixth greatest British writer since 1945, and in 2009, Forbes named him the fifth- highest earning dead celebrity. In fact, his books have sold about three hundred million copies in 55 languages.  But what many don’t know is that Tolkien was also a devout Catholic. And I don’t mean a once-a-week pew warmer. He was a devout Catholic.

Tolkien was a ride-your-bike-to-morning-Mass-every-day sort of Catholic.  He had a deep love for the Blessed Virgin upon whom “…All my own small perception of beauty, both in majesty and simplicity, is founded.”  And moreover, Tolkien had a strong and abiding love for Jesus Christ, truly present in the Most Holy Eucharist.  And while Tolkien did not work his faith into his writings as obviously as C.S. Lewis did, it is certainly present there. However, in his letters to his sons, Tolkien is quite explicit.

In a 1940 letter to his son Michael, who was being shipped off into WWII as an anti-aircraft gunner, Tolkien wrote:

“Out of the darkness of my life, so much frustrated, I put before you the one great thing to love on earth: the Blessed Sacrament…..There you will find romance, glory, honour, fidelity, and the true way of all your loves upon earth, and more than that: Death: by the divine paradox, that which ends life and demands the surrender of all, and yet by the taste (or foretaste) of which alone can what you seek in your earthly relationships …be maintained or take on the complexion of reality, of eternal endurance, which every man’s heart desires.

What particularly strikes me about this quote is how Tolkien relates the Eucharist to Death. The thing is, he turns the simile around: the Eucharist is not deathlike, but Death is Eucharist-like.  In Holy Communion, Jesus gives Himself entirely to us, and asks us to give ourselves entirely to Him. The way to such a radical gift of self is to sever ourselves from inordinate attachment to things of this world so that there is room in our hearts and lives for Jesus and His gifts.  God dwells where He is wanted; He respects our freedom. The little everyday “deaths” that we experience, if accepted as the will of God, can cleanse us of unwholesome allegiances to temporal things so that we can hold fast to God and experience the joy that He desires for us.  And when the day of our own death comes, we will be well practiced in saying:  “Jesus, you are my heart’s one desire! Take me to yourself!”  I mean, seriously, is there a better way to go than that?

In another letter to Michael, this one written in 1963, Tolkien writes:

“The only cure for sagging or fainting faith is Communion. Though always Itself, perfect and complete and inviolate, the Blessed Sacrament does not operate completely and once for all in any of us. Like the act of Faith it must be continuous and grow by exercise. Frequency is of the highest effect.”

Man, oh, man, is he right there. Unless your name is St. Imelda Lambertini, going to Holy Communion once is not going to turn you into a saint. To be fair, it is certainly possible…. but it doesn’t happen often.  That’s because, as Tolkien notes, God is not the limiting factor. The Blessed Sacrament is “Always itself, perfect and complete and inviolate.”  It is we who put a limit on God’s activities in our souls. It’s like a garden hose with a spigot on the end. God says “I’ve got a seven-hundred-gazillion ton reservoir of water for you to water your garden with. I’ll tell you what you need, but you still get to call the shots. You get exactly as much water as you want.”  If we put no limit on God, we could double, triple, and quadruple the size of our garden a million times over, keep all the plants watered, and still not be close to exhausting what He wants to give us. And if we approach Holy Communion with indifference, doubt, and spiritual lukewarmness, we kink our hose and end up shriveling our own garden into an arid experiment in Saharan ecology.  (A desert)

So how do we crank our spigot wide open and leave it there? Well, first off, you’ve gotta scour off the rust, gunk, and sludge that gets caught in the cracks and hampers operations. In other words, go to Confession when you need it. Once a month is a pretty good interval. If we aren’t sorry for our sins and willing to make amends, God respects that, and leaves us right where we want to be, though he never ceases to offer us a way back to Him.

Next, our disposition makes a big difference. Nothing kills the spiritual life like lukewarmness and carelessness. (And these are not the words of a lofty ascetic preaching the dangers of vice from his mountaintop of dazzling sanctity. This is first-hand experience straight from the trenches.)

None of those who cry “Lord, Lord,” will enter the Kingdom of Heaven, but only they who do the will of my Father in Heaven. (Matt 7:21) God doesn’t just want our words; He wants our hearts. He wants to grow in a relationship with us. How do you do that? Same as with any other relationship: by investing yourself in the other. Especially by investing your time. Frequency.  The more we come to know Jesus personally in Holy Communion, the closer we will grow to Him, and He to us. The more we work at cranking on our spigot handle, the more we will be able to overcome the tight joint, the stubborn lever, and the rusty handle, and the more we will let Christ into our lives.

I think one really cool lesson that we can learn from Tolkien is that the Catholic Faith can be lived out anywhere. It’s something that we’ve seen from saints all down through the ages, but it hits home in a different way when you realize that it’s been done by one of the most popular authors of the twentieth century.  The insights that he shares are not those of a casual observer, but of one who sees and speaks the truth. I hope that the wisdom he shared with his son may resonate in your hearts, and bring you to a more profound love and relationship with Jesus Christ as you journey on toward eternity.

All for Thee, Sweet Jesus,
Through the Immaculate Heart of Mary,
For the glory of God
And the salvation of souls!